It's not easy to go and visit "˜The Camps Breakerz' crew of breakdancer's in the Gaza Strip and it's definitely impossible for them to come and visit you! Established in 2004 by Muhammad al-Ghreiz, or Funk as he is known, it has it's main "˜crew' centre in Nuseirat refugee camp in central Gaza. Embracing the Hip Hop lifestyle and fashion of break-dancing, street art, DJing and Rap the "˜crew' have had to work hard to find acceptance in the "˜conservative' atmosphere of the Strip. "At first we were treated with suspicion as practising a western art but overtime we made shows for kids and the community and people came to accept our ideas." Says 25-year-old Ahmed al-Gheiz, nicknamed Shaark, the present leader of the crew: "We've adapted our performances and style to reflect the situation here in Gaza."

This fusion of breakdance with a Gaza political twist was evident during Israel's "˜Operation Protective Edge' launched against the Strip on the 8th of July 2014. The crew put on two shows in Gaza during the conflict risking life and limb to cross the Strip and perform in Nahel Ouze and additionally at the YMCA in Gaza City. Staging a moral boosting dance routine to the accompaniment of "˜We will not go down Gaza tonight' with their heart felt performances from the events being posted to "˜youtube'. Additionally their dance center was opened up as a place of temporary refuge for many of the Gazan residents who were made homeless during the bombing.

The Break Boys home of Gaza is just 25 miles long and between 3 and 7 miles wide and is inhabited by roughly 1.8 million people. Unemployment stands at around 40% with youth unemployment peeking at around 44%. Just over 60% of the population is age 25 or under. Since 2007 Gaza has been subject to a full land, air and sea blockade sprinkled in-between with periodic relaxations of restrictions but never fully withdrawn.

It is amongst these war and siege conditions that the "˜Camp Breakerz' was formed and conscious from its inception of the significance of role models within the community: "˜People are depressed and frustrated from the situation here.' says 21 year old Jarule: 'The breakdance allows us to put our energies into something useful.' He adds: "˜It decreases my depression when I put something into this sport.' Shaark concurs with this and adds: "˜Some kids come to training and say that they need to work things out. We tell them that we are all family here and if someone has a problem we will try to solve it.'

The hip hop Artist's of Camps Breakerz strive to offer a rock of stability to a generation trapped in perpetual war. The United Nations estimates some 400 thousand Gazan children are in need of some form of psychological care and while the group are not trying to claim all the solutions the break-dancers in there own words placed on there web site see there center and collective as a place: 'to give kid's confidence, a sense of pride in themselves and the hip hop community and a relatively safe and normalized place to meet up.' Ibrahim Ramdan, breakboy name Dark adds to this: "˜if someone has something in his or her life then it has purpose.' 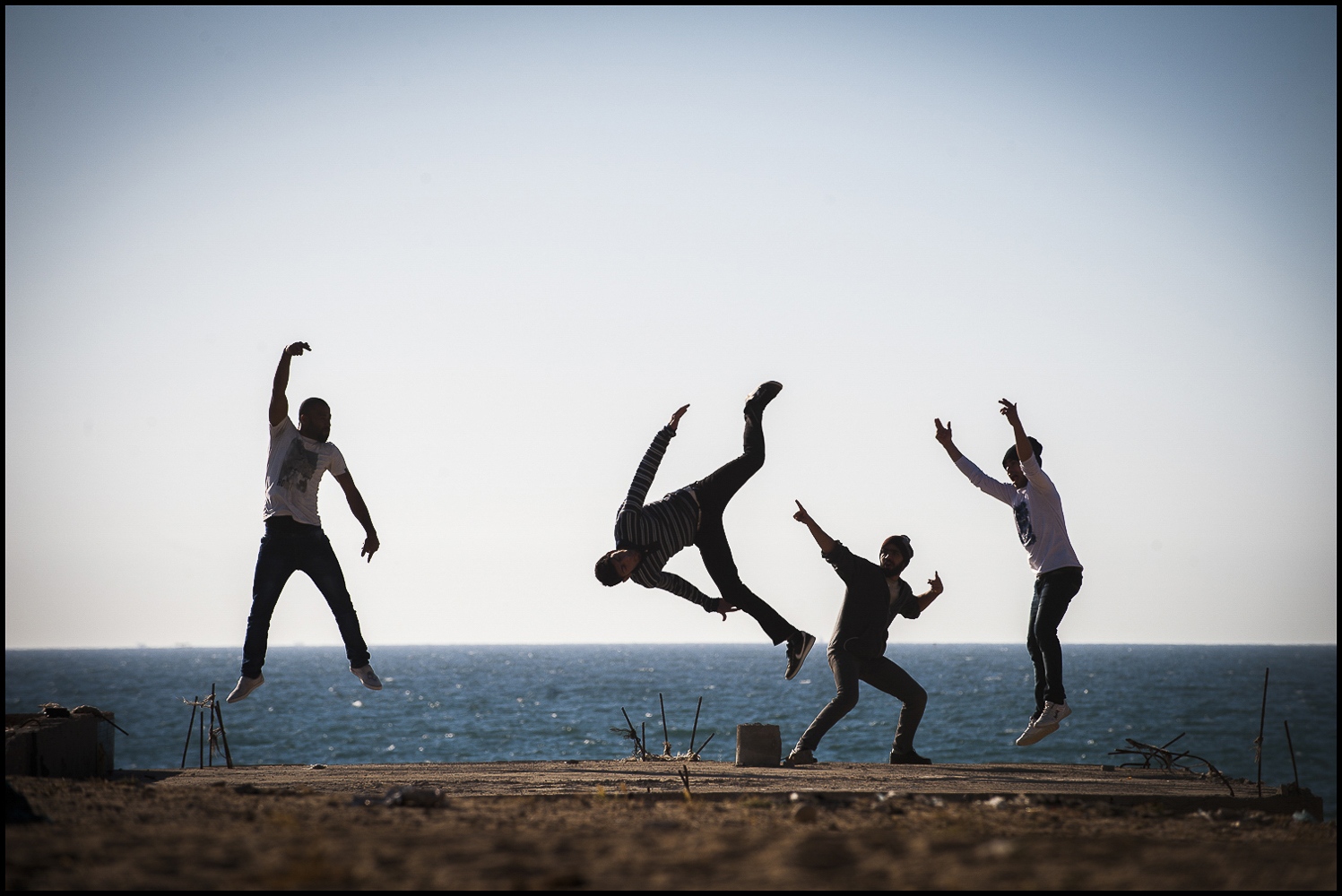 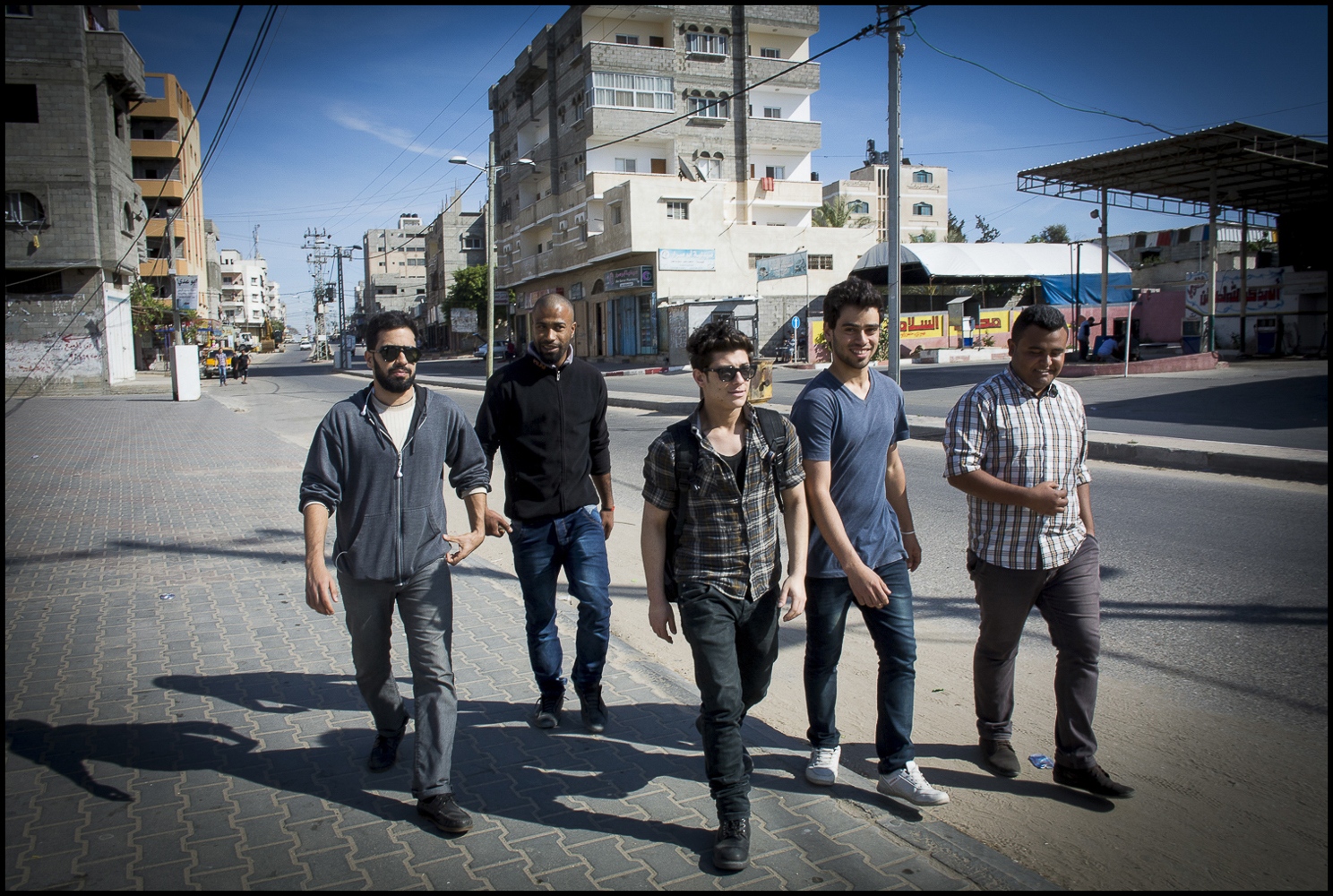 Some of the Crew make their way through Nuseirat Camp to 'The Camp Breakerz' dance center. 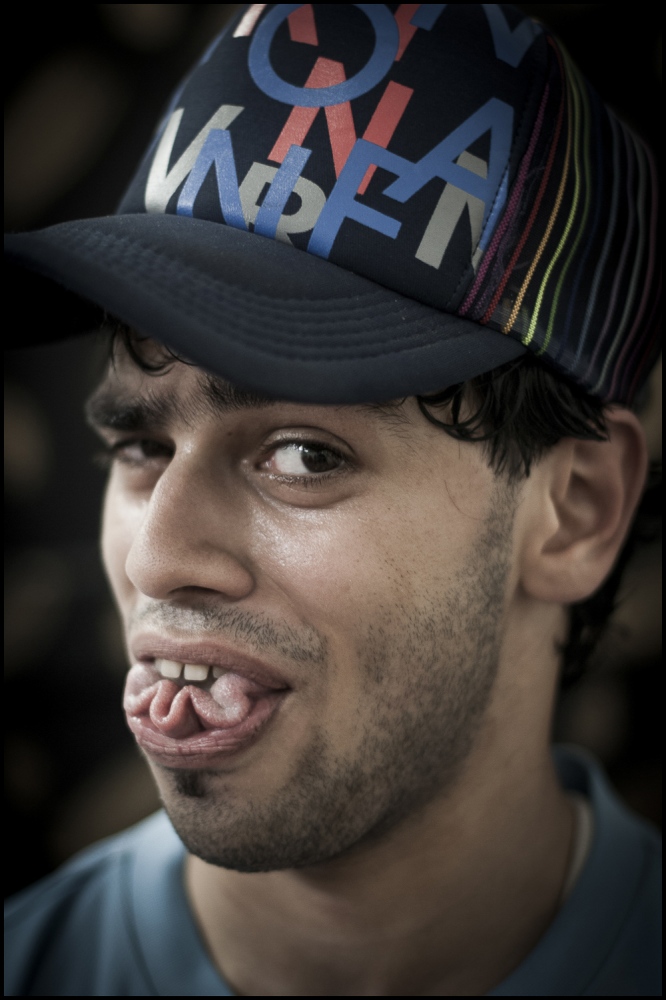 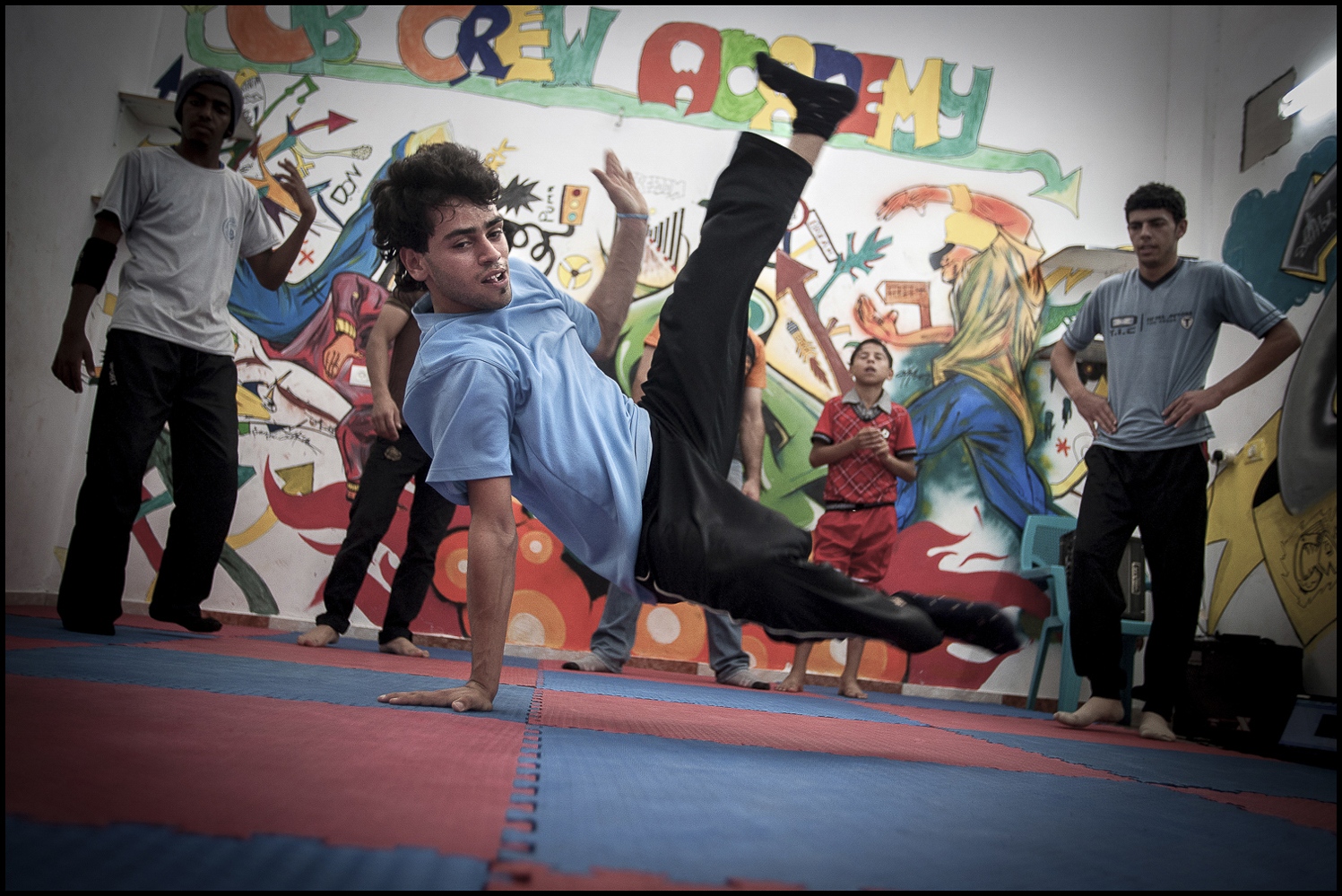 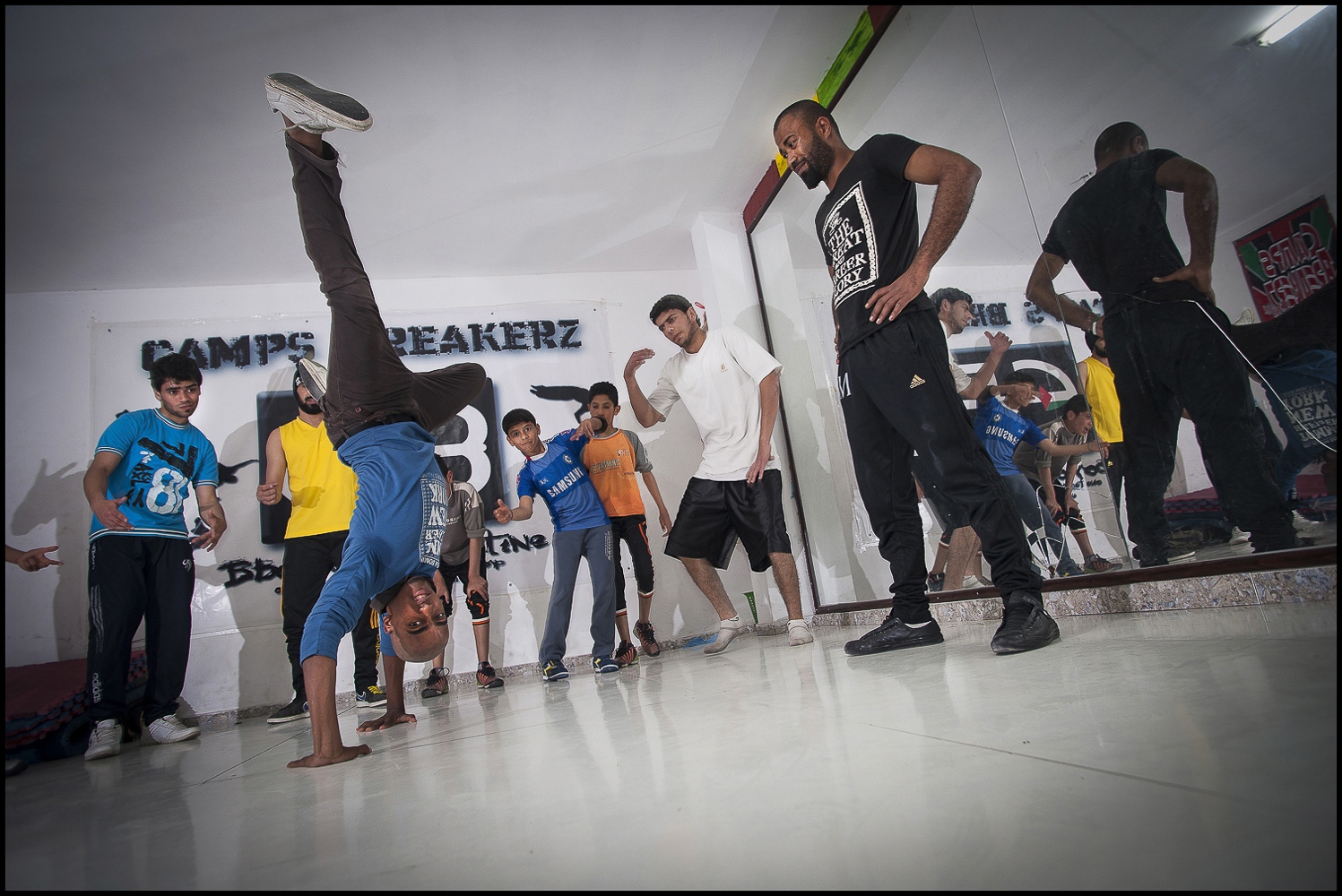 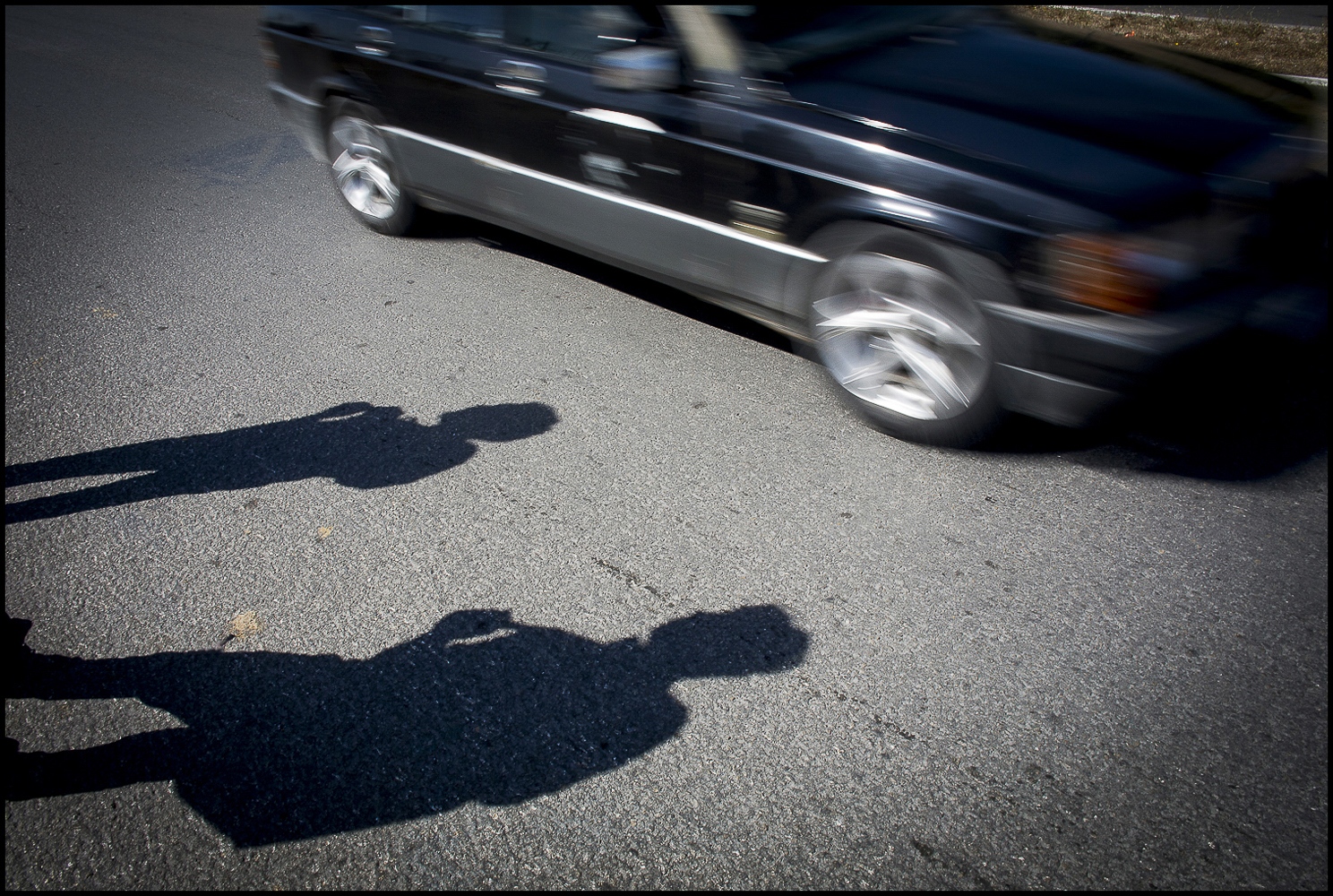 Flash & Shaark waiting for a lift on Zahrah Road, Gaza Strip. The shortage of fuel in the Strip has become acute since the destruction of most of the 'tunnels' bringing in supplies from Egypt. 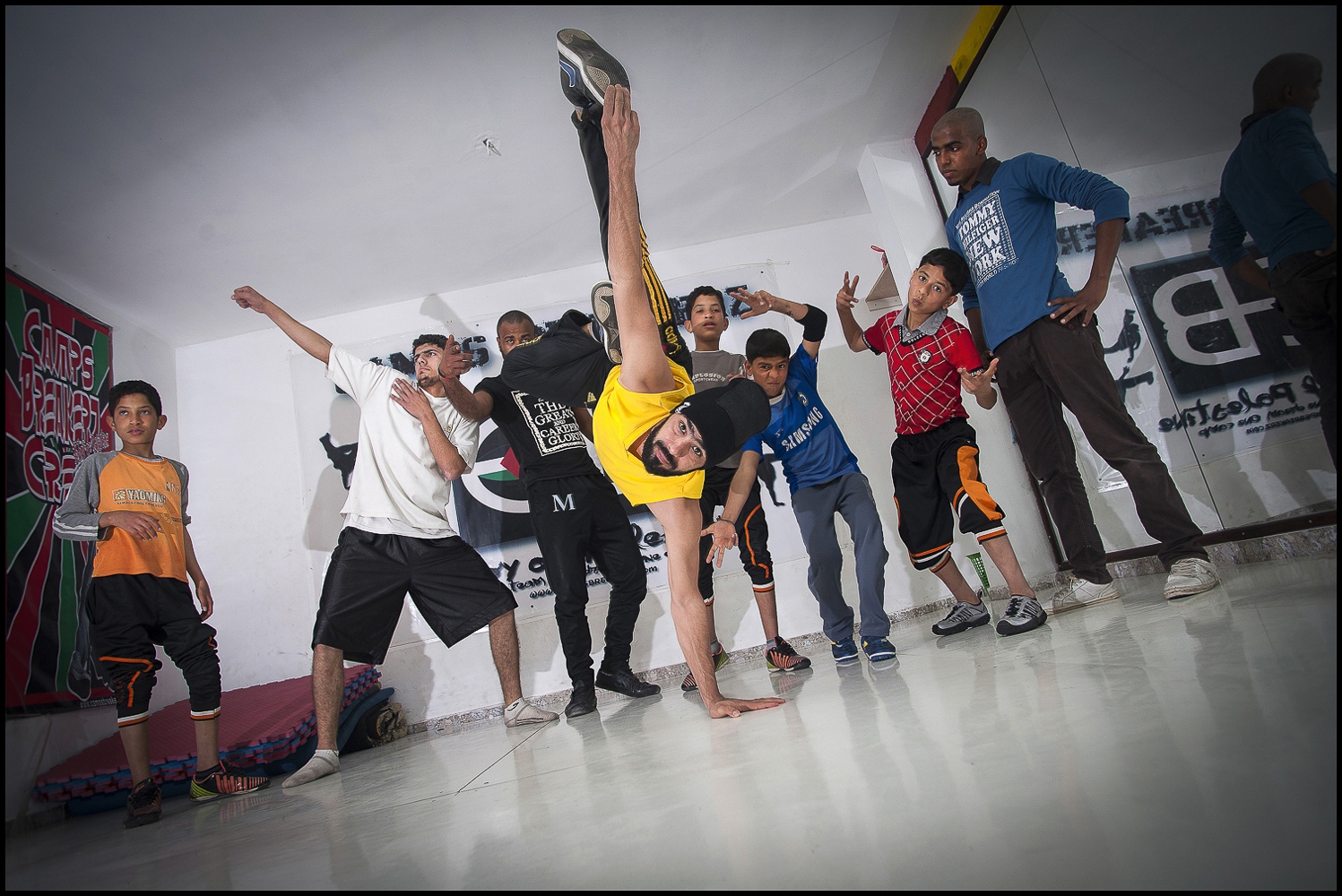 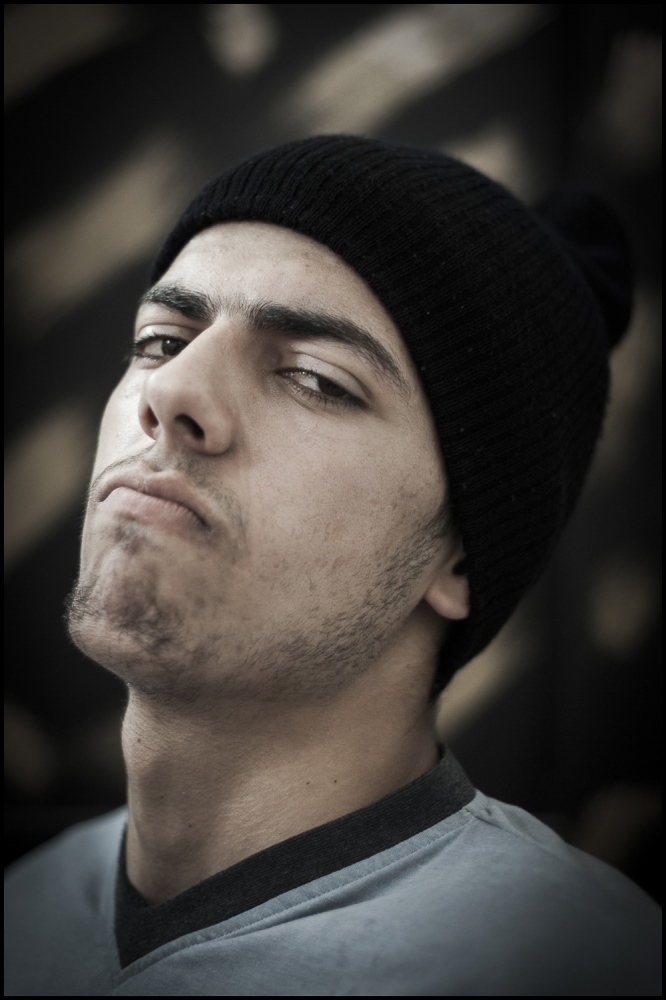 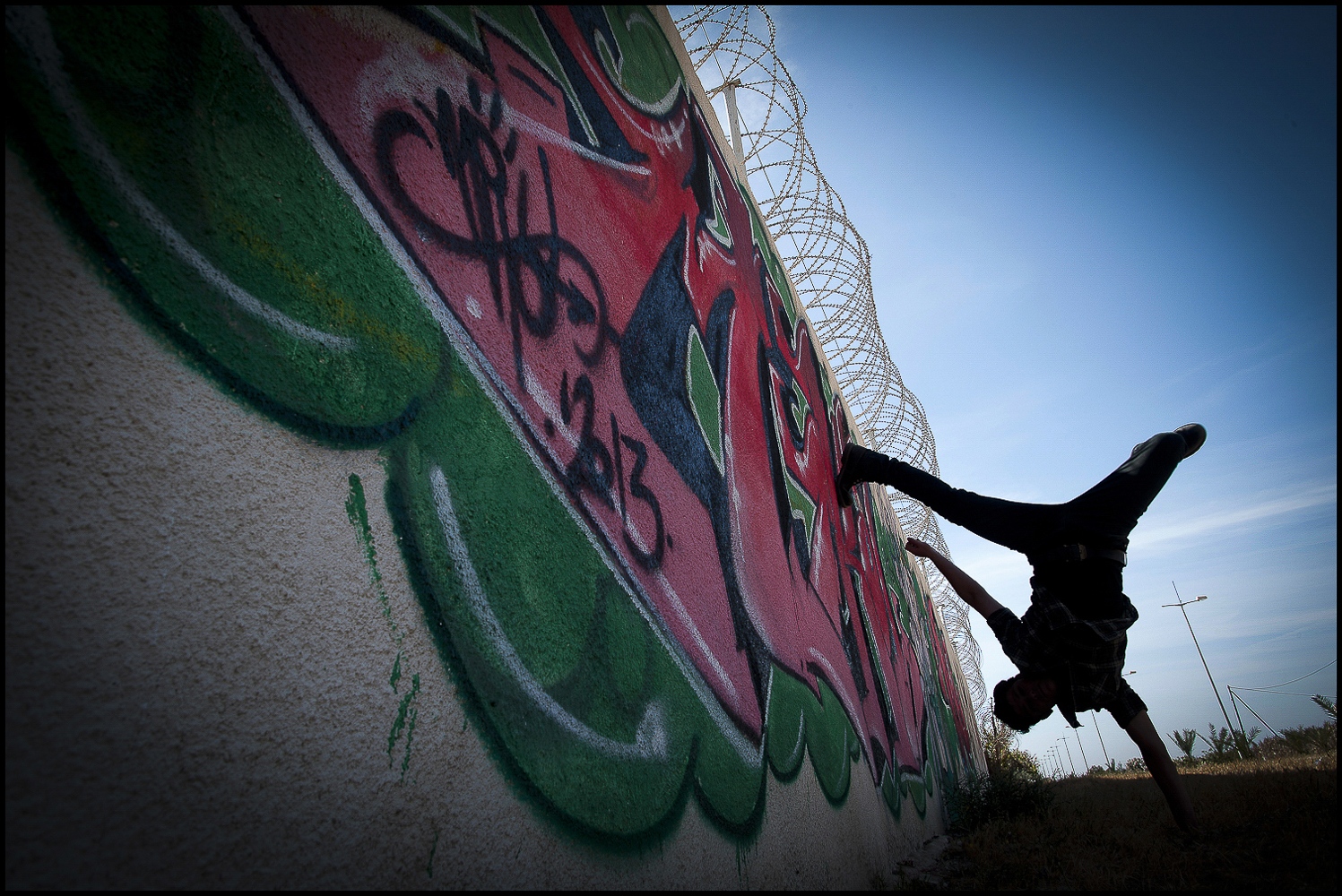 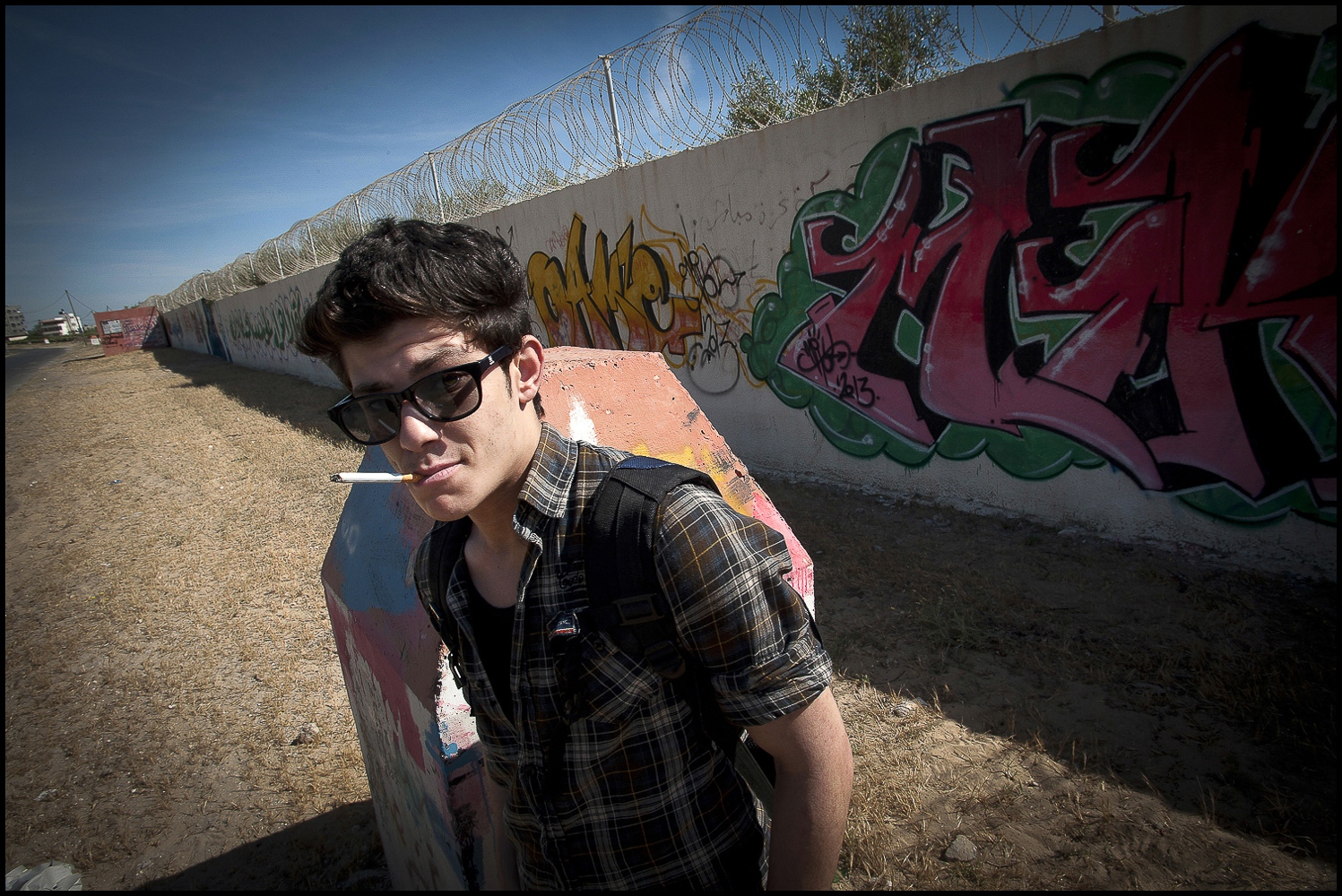 Break dancer and DJ Flash about to light up alongside the graffiti on Zahrah Road in the Gaza Strip, occupied Palestinian territory. 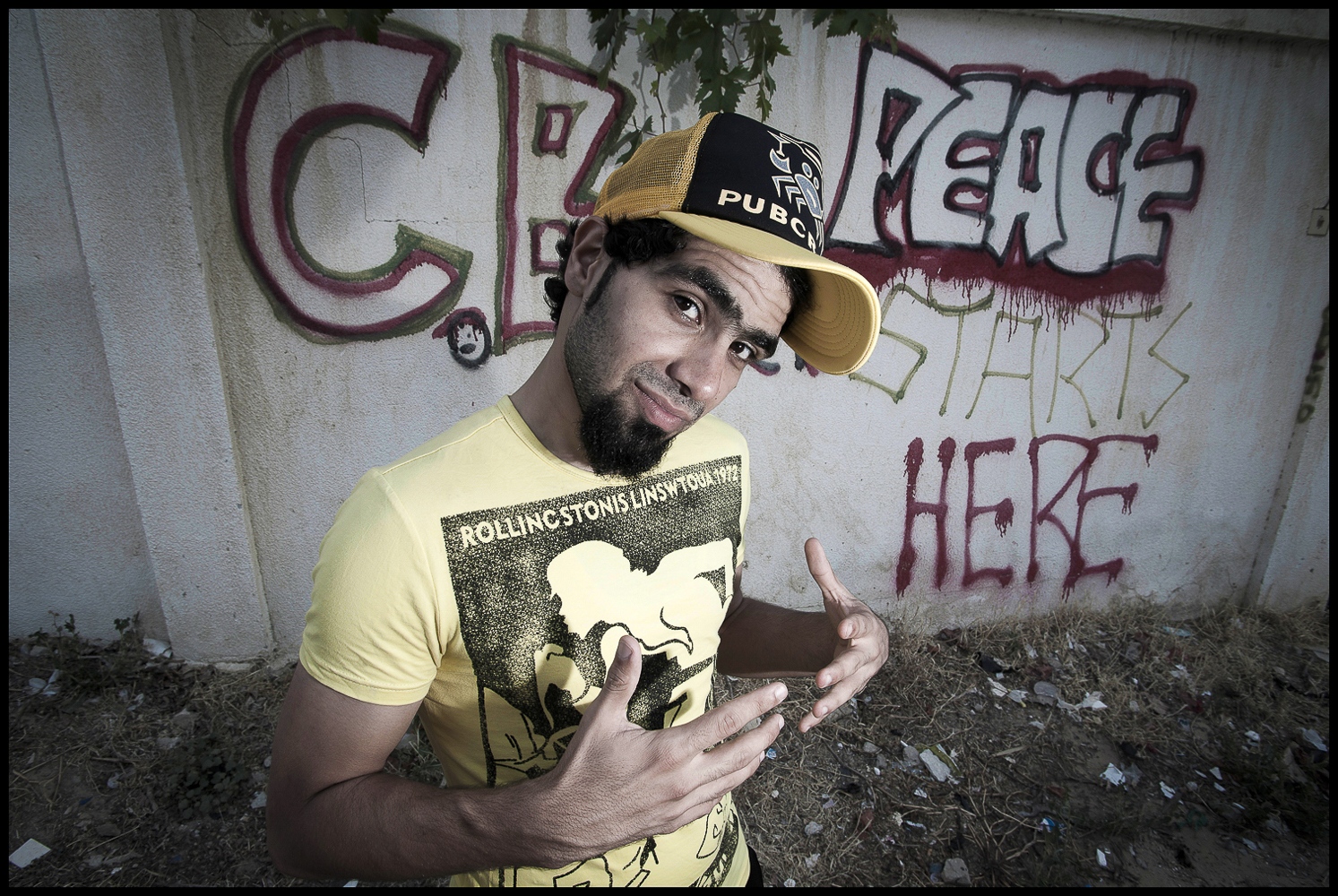 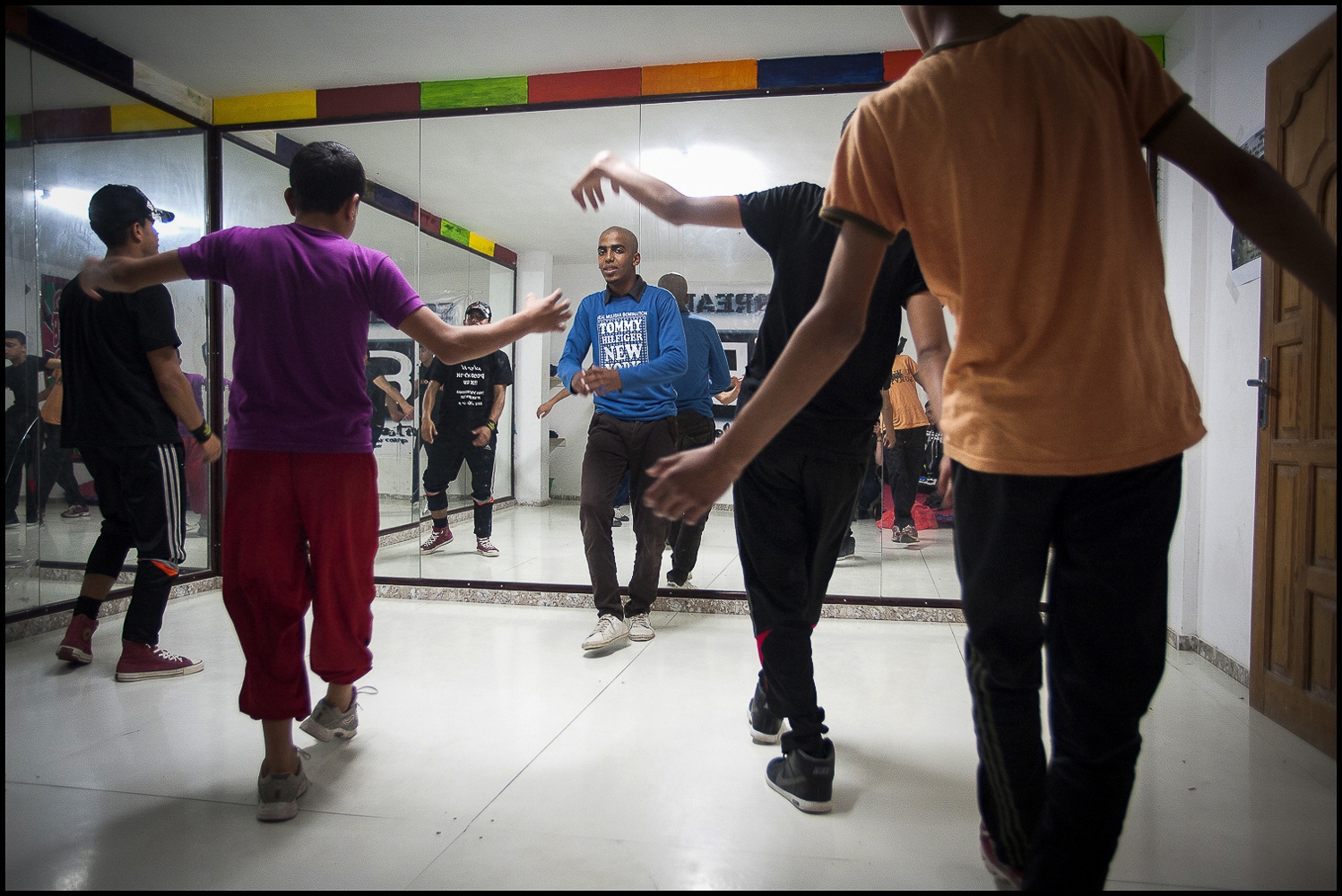 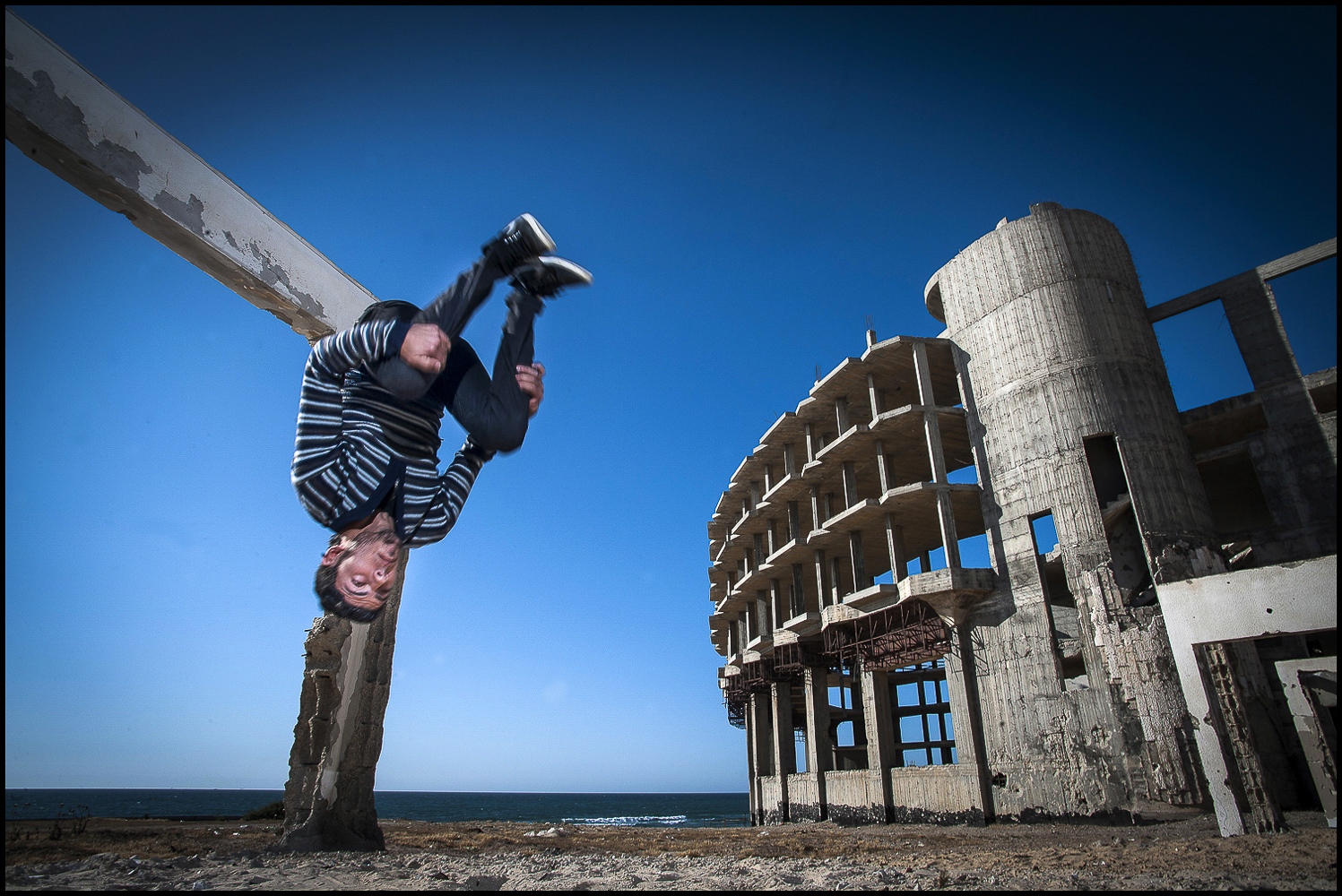 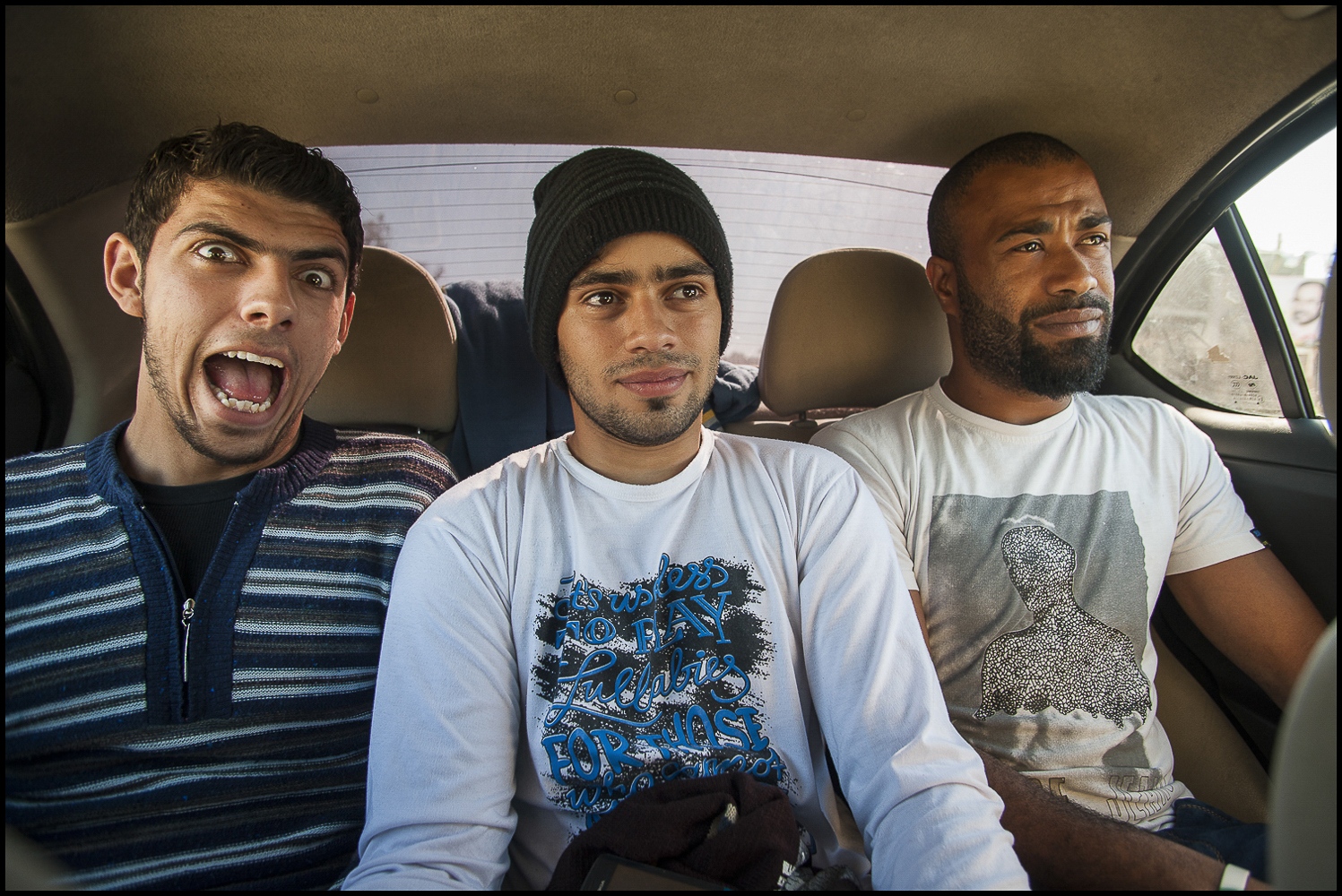 Hanson, Jarule and Chino on route to Alwaha Resort through Nuseirat Camp in the Gaza Strip. 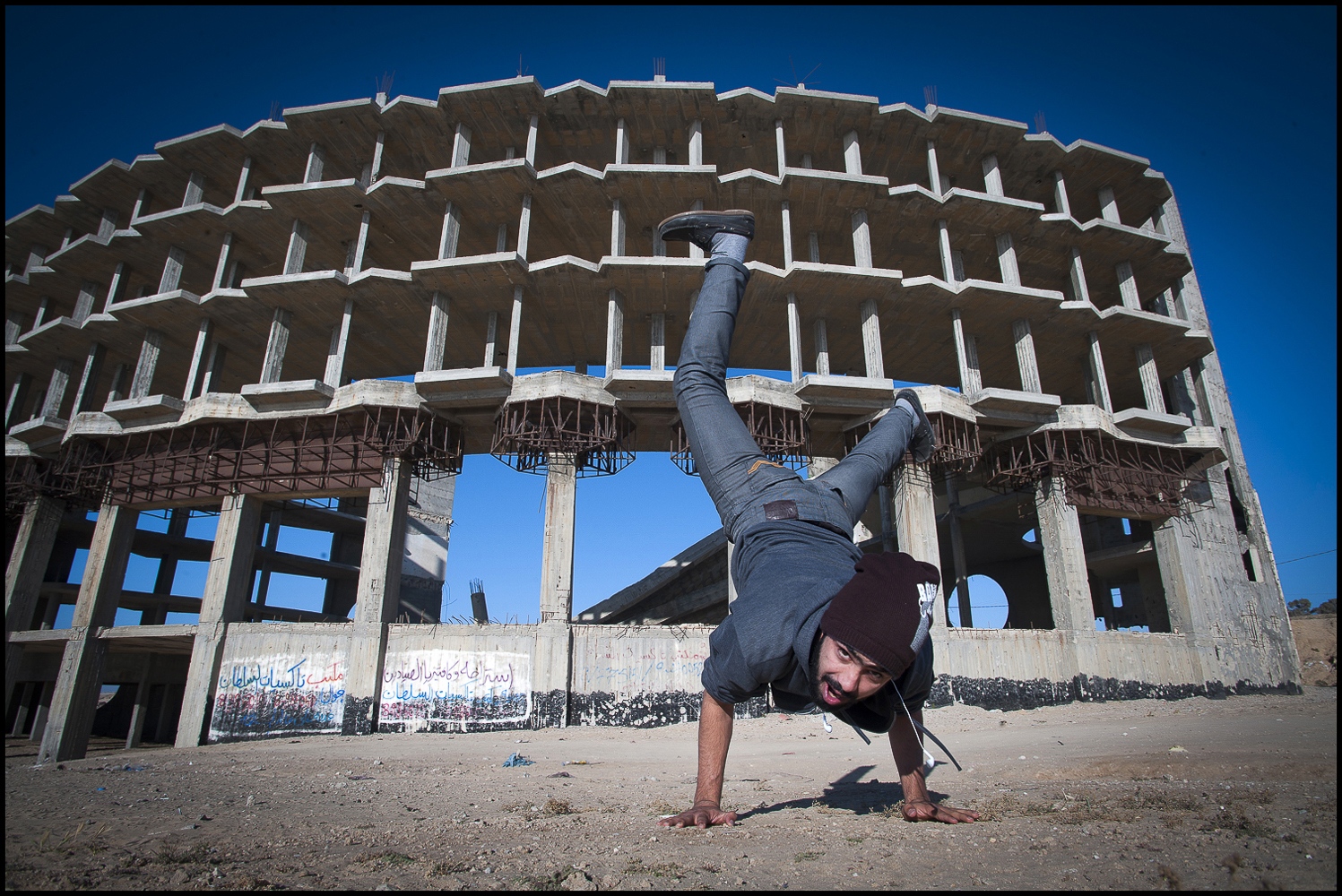 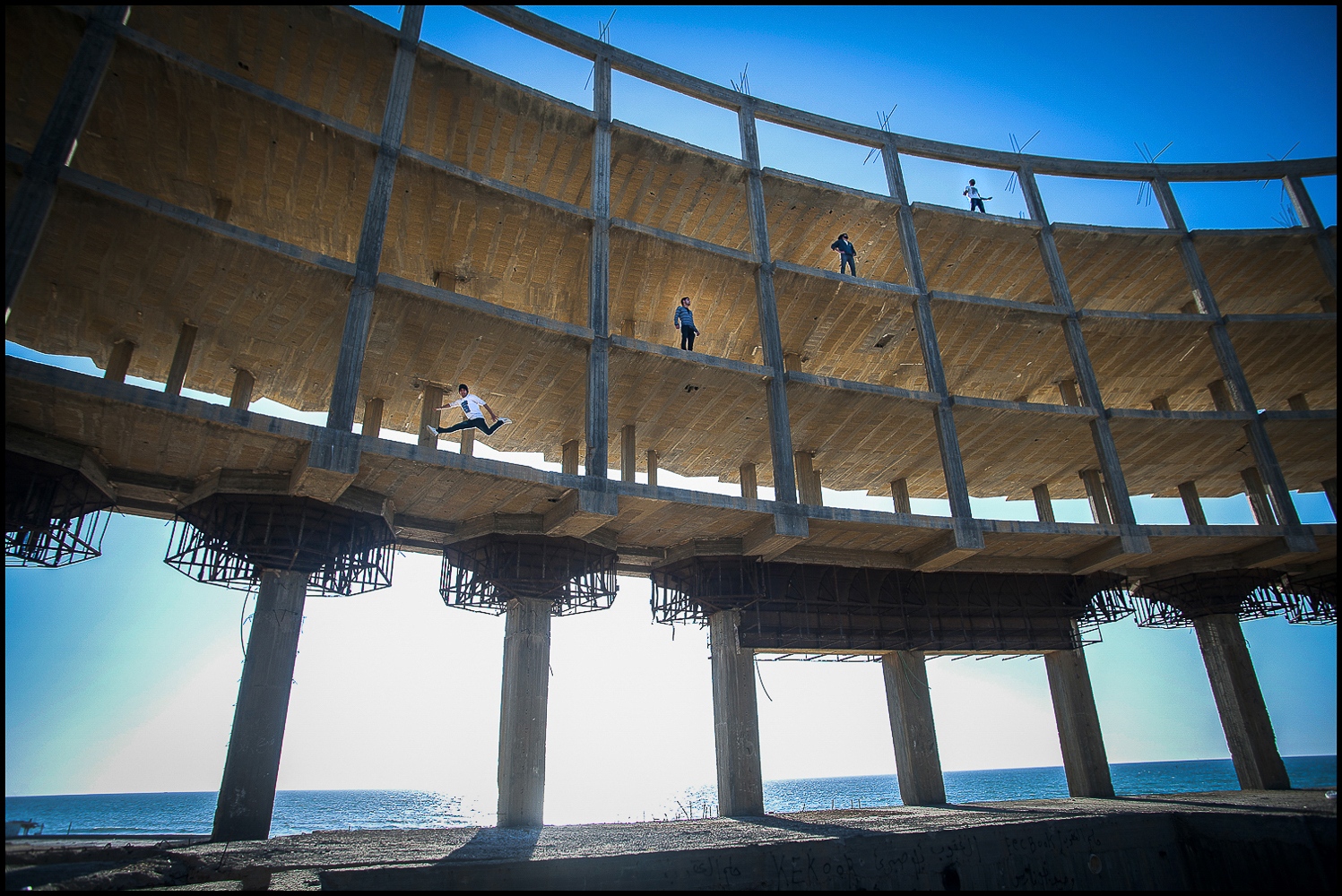 The Camps Breakerz Crew at Alwaha, Northern Gaza, Palestinian Territories. The structure they are standing on no longer exits. it was destroyed during Israeli bombing in "Operation Protective Edge".